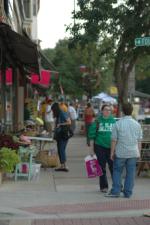 Last Tuesday’s Forum was just the beginning of a plan of work on Retail Support Strategies (RSS). It may have been only the first step but it was an important one. At the NDDC, we believe that gathering stakeholder input is the best way to start a process.

The RSS work plan comes out of the EDA’s Economic Development Plan. Created over many months in 2006 with TIP Strategies, the E D Plan was a comprehensive effort to get all the various groups in Northfield pulling in the same direction for the community’s economic vitality. Members of the EDA visited with various groups in town, including the NDDC Board of Directors, explained the plan and asked for support.

The NDDC responded by offering to implement the tasks in both RSS and Business Recruitment and Expansion. In December of ’06, the EDA voted to contract with the NDDC, in collaboration with the Northfield Area Chamber of Commerce, for the RSS work.

The Work Plan has three phases: 1) Structuring the Process and Gathering Stakeholder Input, 2) Researching and Reporting on Potential Recruitment Prospects and 3) Linking Retail Promotion with Tourism Marketing. The Forum was part of Phase 1. Another important step in Phase 1 is setting up a Task Force. Among the responsibilities of the Task Force will be to guide the review of existing materials, develop strategies for strengthening the community’s retail, and recommend steps to increase the retail sales leverage from existing assets.

All of the Task Forces’ recommendations will be reviewed and endorsed by the Boards of Directors of both the Chamber of Commerce and the NDDC before being forwarded to the EDA. The goal is to be implementing at least some of the recommendations by July 1st.