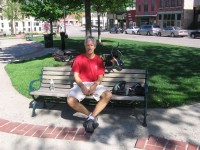 As I was following up on the “entertainment” for Friday’s Girls Nite Out, I noticed a bike rider sitting in Bridge Square. I didn’t recognize him so I thought that maybe he was a visitor to Northfield.

Indeed, his name is Brad Gluth, and he rode his bike down from Burnsville this morning. He said it was beautiful weather, he took the day off from work, and Northfield was a perfect destination.

I told him there was some controversy about bringing bike trails, and bike riders, to town. He asked, “what, they might stop and spend some money?” Really, I’ve never met him before and didn’t bribe him.

He said that he’s been on two bike rides across the United States and many bike rides in different states. He said that we’re really lucky to have such nice bike trails in Minnesota.

He asked if I ever rode an Iron Man. I said “No”. He said that he wasn’t really too enthusiastic about those events. He said that those riders weren’t very respectful about sharing the road. He said that they were nothing like the riders that use bike trails.

I’m hoping that maybe Brad will read this blog and maybe go to Locally Grown and particpate in the bike trail discussion.