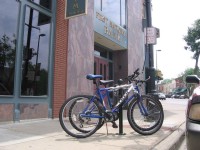 I was running an errand at Carleton College when I was stopped by Rec Center Manager Terry Rivers and his wife Beth, well-known bike commuters. They asked me why there aren’t more bike racks in downtown Northfield.

In fact, we’ve been working on that issue for quite a while. However, I can see their point. A quick survey of the bike racks in downtown reveals that they tend to be heavily used and merchants have told me that they could use more.

The Mayor’s Task Force on Streetscape is meeting this week. Joe, Keith…you guys on it?