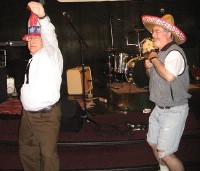 Where’s the Wall Street Journal when there’s an innovative initiative to be covered?

Perhaps that’s part of this whole citizen journalism thing…when you want something done right, sometimes you’ve got to do it yourself.

Northfield, Minnesota – Mayor Lee Lansing peeled off his coat, shook his booty, and stunned the 400 women in the audience with his magnificent moves, displaying a surprising proficiency in his performance, as well as his characteristic self-confidence, in a fearless effort to stimulate retail sales.

That’s the Mayor on the left, wearing a hat he borrowed from his Uncle Sam, after flinging his jacket to a group of shrieking women. Elvis may have left the building but the Mayor is clearly in the house. I have no idea as to the identity of that guy in the tattered shorts on the right. I do know that the vest he’s wearing was purchased at Larson’s Fabric Printing during Crazy Daze.

Maybe you had to be there…in fact, if you weren’t, you should have been. Women are still talking about it this morning on the sidewalks and in the shops of downtown, Northfield.

To see a gallery of photos, and a taste of all the fun, go to Locally Grown.