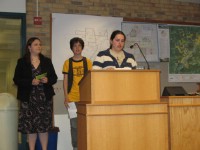 The Northfield Union of Youth (NUY) Northfield’s Union of Youth, the Key, is so successful at serving our young citizens that the time has come for the need of a significant expansion of their cramped facility.

The NUY presented to Northfield City Council Monday night with the agenda of asking the city for their currently rented building (which is city-owned). The representatives brought their recent annual report and, according to several attendees, “one heck of presentation” to the councilors.

Marie Fischer, Andrea Lovoll, and Ruth Amerman (pictured) gave a general overview of what the NUY is all about and then transitioned into asking for the city-owned building.

The NDDC has long been aware of the importance of The Key as a place for youth in downtown and the role that youth play in downtown.