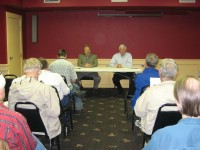 Senator Tom Neuville and Representative David Bly went from a historic overview of the recent session to the next steps for addressing important issues at this morning’s Downtown Forum.

The two elected officials agreed that we’re not staying on top of required investments in Minnesota but disagreed on the best ways to pay for needed infrastructure and services.

Many of the questions and much of the discussion focused on transportation issues. Tom and David agreed that we’re not keeping up either with maintaining the old or building the new and that the challenge is increasing. Ideas for funding this work included the gas tax, toll roads or a congestion fee.

On the specific issue of Highway 19, we were advised to preserve the corridor, once determining where the road should be, and to communicate regularly with elected officials at all levels. The fact that the road is both on the District Line and the County Line makes progress more challenging and the fact that the Rochester District is in the roughest in the state make it more competitive. The legislators and the citizens committed to stepping up the pressure on this issue over the next few months.

City Councilor Scott Davis brought up Local Government Aid. He suggested that the volatility of the current system made predictability for budgeting almost impossible. The legislators agreed that the formula for calculating the aid should be more predictable to facilitate local budgeting for essential services and that the challenge was of finding such a formula while also assuring that there was some semblance of geographic equity.

Finally, NDDC Vice President Joe Grundhoefer brought up commercial real estate taxes. The taxes on his building have gone from $7,000 to $30,000 over the last 7 years. He wondered if there wasn’t something the state could do about real estate taxes in historic districts, where the maintenance of these cherished structures consumed a significant portion of the operating budgets. Tom and David agreed to meet with the NDDC E. R. Team and discuss possible ideas for addressing this challenge. One thought raised at the meeting was an income based approach to valuations within a historic district.

All agreed that it would take the participation of local building owners and local officials to make real progress on this issue. We committed to meet later this summer and sketch out some action steps that we can take together.