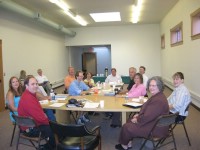 At the request of its members, the Retail Support Strategies Task Force hosted members of the Economic Development Authority at a meeting this morning. It turned into an even bigger event, with members of the City Council as well as of the boards of both the Chamber of Commerce and the NDDC attending.

Don’t let these smiles fool you, we talked about the very serious subject of making Northfield more “business-friendly”.

As part of their efforts on the EDA Work Plan, the Task Force members tackled the “Needs of Existing Retailers” and “Obstacles to Development/Redevelopment”. They wanted to present their thoughts directly to the members of the EDA. The most mentioned need of the retailers was the creation of a more business-friendly environment in Northfield. As part of removing obstacles to the creation of this more friendly environment, the Task Force suggested reducing code complications, more consistent enforcement, tests for reasonableness/feasibility, establishing “one-stop shopping” at City Hall, identifying a staff advocate for businesses or development, and making business support at least as important as rule enforcement.

Everyone agreed that Northfield needed to create a culture of business-friendliness. A number of specific steps were suggested. Ultimately, however, it comes down to attitude and that attitude must be set by the leadership. The EDA and Council members pointed out that it was a bigger issue than Downtown or Highway 3 and the Task Force or the EDA; all groups in the community must work to make Northfield more business-friendly.

The EDA promised to set up a work session with the Council. It was agreed that the Chamber, the NDDC and the RSS Task Force would attend and that we would work to send out the word to all individuals and groups that Northfield will do what is necessary to become more business-friendly.

2 thoughts on “RSS Task Force Meets with EDA and Council”