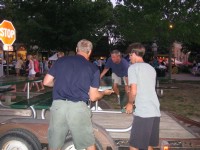 I think it was success.

The Second Annual Taste of Northfield, that is…

I was so busy and there were so many people and there was so much going on that I didn’t have time to take many pictures, much less try to quantify the results.

When Dan Bergeson, Dale Finger, Joe Grundhoefer and I “debriefed”, a little after ten o’clock last night, it seemed like, based on vender sales, we had about three times as many people as last year, and that wasn’t including the girls scouts.

While the papers scream out about a town allegedly sinking under chemical and political chaos, the citizens and the merchants of Northfield steadily move forward…

…and occasionally have a heck of time together.

Others will probably comment more thoroughly and cleverly than me about the event, so I’ll just thank those who made it possible.

In addition to our Corporate Partners, College City Beverage and Malt-O-Meal, over sixty businesses contributed to the event. Then there were the approximately one hundred volunteers, who did everything from pick up trash to organize the silent auction. Although the NDDC provided the brains, 1st National Bank and The Key provided the brawn.

After the party is over, there is the clean-up. Here are Kellen Kirchberg of the Key (you can barely see the top of his head), Rick Estenson of the 1st National Bank (you could hardly see the sun around his big back), Dave Shumway of the 1st National Bank (all that shoveling and sweeping paid off last night), and Eric Emmons of The Key (cautioning Rick about not hurting himself), loading the picnic tables on a trailer for their return to the City Shop.

To everyone that supported the event, “Thanks, we needed that…”.