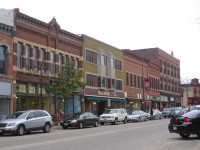 It’s been a pretty good few months for Downtown Northfield, at least in terms of positive press about our walkable shopping district in our authentic historic center.

Last fall, the St. Paul Pioneer Press suggested that we were the top holiday shopping destination in the upper Midwest. This summer, the Project for Public Spaces named Downtown Northfield the best small town neighborhood in North America. Now the Star Tribune put us first on the list of their new Day Trips feature.

The article mentions our “bohemian ambiance”, which apparently includes a kid in dreadlocks serving tea, a collection of mothers with toddlers lunching at a deli, an upscale art gallery and an old-school bakery. It goes on to say that the fact that “the college crowd shares the streets so amiably with townies not only adds to Northfield’s appeal, it speaks volumes about it. No matter your type, something will grab you among the pretty parks, many restaurants and eclectic stores (not a chain among them) that hug the Cannon River.”

Thanks to the Star Tribune and Kerri Westenberg for a great article about a great place!