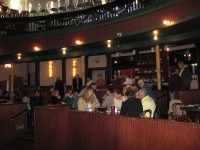 Over forty people, most of them Northfield retailers, showed up at the Grand Event Center early this morning to discuss the Retail Support Strategies Task Force’s report. For those who haven’t been following the work of this group, the Task Force was established in early 2007 to tackle one of the goals of the Northfield Economic Development Authority’s master plan for economic development in the city, “Develop a coordinated retail strategy.” Representing both retail districts, Downtown and “Uptown” (the district flanking south Highway 3), this morning’s gathering considered and discussed the Task Force’s findings and recommendations.

The stated outcome for the today’s meeting was to identify five to seven strategies to pursue immediately (given appropriate resources of time and dollars), with the longer-term goal of implementing some of the almost three dozen Task Force recommendations over the next three to eighteen months. Based on the notes taken by NDDC Board Members, we’ve still got at least a dozen strategies that the group suggested merit further consideration.

Some of the topics discussed at length today were the need for an increasingly sophisticated events calendar that pulls info from a wider range of event sponsors and pushes selective info out to specific segments of the business community, the recognition that retailers need to shape their product mix and marketing appeal to meet both local residents and visitors to build the broadest base of customers, and the belief that public investment should be strategically targeted on projects that will provide the financial leverage to produce significant economic benefits for Northfield.

Next steps includes sending these higher visibility action steps out to the attendees of this morning’s meeting and ask them for further prioritization, as well as soliciting additional ideas that may have percolated since this morning’s cup of coffee. Once we identify these priorities, and have a more focused action plan, we’ll work with our economic development partners, as well as Northfield’s retail community, to steadily implement the ideas.