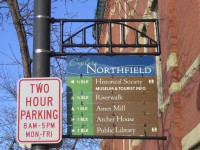 The first in what is scheduled to be a series of wayfinding signs in Northfield has arrived. It was installed on 4th Street, just up the hill from Division Street, on the south side of the First National Bank building.

A little over four years ago, the NDDC’s Action Squad made a presentation to the City Council on recommendations for public investments that would stimulate economic vitality. One of the suggestions was wayfinding signage. Many of these ideas were incorporated into the city’s Streetscape Plan. As NDDC President Dan Bergeson stated at yesterday’s annual planning retreat, this type of work requires great patience.

This morning there was an ad hoc review and discussion of the new sign, in the alley officially known as Grastvedt Lane, between Councilor Jim Pokorney, NDDC Treasurer Dave Shumway and myself. We were thinking that this might not be the final sign but rather an experimental prototype. Jim suggested that there will be another one going up at the “horseshoe parking lot” at the corner of 3rd Street and Highway 3. Both signs are intended to stimulate feedback before the series is completed.

So check out the sign, or signs, and offer feedback. You can call Joel Walinski at the City of Northfield, catch Jim Pokorney behind Blue Monday, or comment on this website. All of us are interested and will continue to discuss the sign. I’ll admit that I’m pretty excited about it.

By the way, bike racks and benches are coming soon!