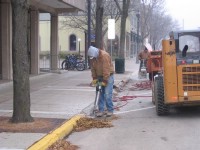 You might think from the title that I was going to talk about the Santa’s House on Bridge Square.

The brain-child several years ago of (former NDDC Board Member) Linda Schneewind and (her husband) Eric Hope of digs, the delivery of this festive addition to the holidays downtown has been coordinated in recent times by (NDDC Vice President) Joe Grundhoefer, owner of J. Grundy’s Reub-N-Stein. After being stored in the “off season” at (First National Bank Vice President) Rick Estenson’s farm, the house was delivered a little earlier this year by Rick Pavek Construction.

In fact, I was talking about the curb work. In my five years of association with the NDDC, and my work with Joe, a topic near and dear to his heart, and no doubt at the top of his wish list, has been the repair of the much damaged curbs in downtown. As I walked from a meeting at Goodbye Blue Monday to the NDDC office this morning, I could see that Santa’s Infrastructure Elves were recognizing the fact that Joe must have been nice more than naughty this year.

So, ho, ho, ho, Merry (early) Christmas to Joe Grundhoefer and all the downtown stakeholders who have been patiently awaiting this (not necessary to gift wrap) present to the streetscape. You can be sure that we’ll be sending candy canes instead of coal lumps for Director of Public Services Joel Walinski‘s stocking this year.