…or is she running with wolves? 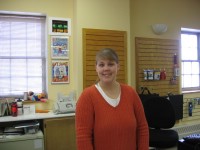 I stopped by the Art Store to say “Hey” to Ann Marie Boyle. As many of you are probably aware, she’s closing down The Art Store.

After 4 years of owning and operating the store, Ann Marie is heading to Australia. Contrary to many colorful rumors (she’s running away from her marriage, she has a rare disease that can only be cured by going down under, and, my favorite, she’s doing some hardcore training that involves running with wild dogs…I think dingos in the outback), she is joining her husband to lead a St. Olaf College environmental science program on the island continent.

It is really sad to see the store go. It has been in Northfield for 29 years, with 2 different owners and at least 6 locations. It served people from the Minnesota River to the Iowa border and from the Wisconsin border to the South Dakota border. Apparently, it was the last independent art store in this region.

Ann Marie will be missed by more than just the artist community. She served on the Retail Support Strategies Task Force and the Chamber’s Retail Committee. In both groups she was admired for her intelligence, outspokenness and endless creativity.

Her closing comments to me were: “It’s been one of the greatest experiences of my life. The one thing that could have made it even better was if Northfielders would give more support to downtown Northfield. Increasingly my customers are from out of town and they all comment what a great place we have here. I don’t think some residents realize what jewels we have in downtown Northfield”.

I didn’t even have to bribe her with a beer. Thanks for everything, Ann Marie, and good luck with those dingos.

3 thoughts on “Ann Marie Rides into the Sunset”