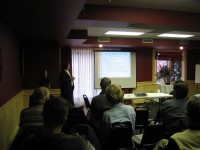 I think that it says something about Northfield when about forty citizens show up at 8 o’clock in the morning to hear a presentation on City Finances. As you can see by my lame photo, at this morning’s Monthly Downtown Forum, Kathleen McBride shined some light on this sometimes shadowy subject.

Mac began her presentation with a topic that has been at the top of some of our leaders’ agendas for some time, the Capital Improvement Plan. This is the City’s long-term investment plan, including, potentially, a new liquor store, a new city hall, a new library and a new safety center.

The group of attendees clearly put this topic in the context of on-going operating costs for the city when contemplating taking on additional debt to finance these potential projects. In response to questions and comments, Mac made it clear that she viewed capital improvement decisions as balancing the prioritization of a community’s critical needs with the citizens’ ability to take on a reasonable debt burden.

To put it in a really big picture, Northfield’s legal debt limit, based on a total market value of $1.18 billion, is about $23 million. Our community has traditionally been careful about taking on debt to finance big projects. In fact, Mac’s final slide showed that if the City was actually going to take on all of the above mentioned projects, through bonding alone, the annual cost of servicing our debt would rise from $800,000 to $2.8 million.

Mac’s presentation was quite informative and, helped out a few times with translations by Director of Operations Joel Walinski and Former Councilor Dixon Bond, generally quite accessible. Of particular interest to a number of people was the discussion of the Master Development Fund. I think that she had about four hours of information and only an hour and a half to share it. She offered to come back again in the not-too-distant future.

Perhaps we could touch on the City’s income and expenses in that session. I think that would be of interest too.

Thanks again to Mac for making herself available to downtown stakeholders!