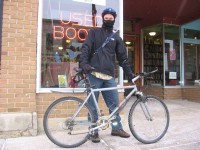 In a recent exchange, Jerry Bilek, owner of Monkey See, Monkey Read, accused me of being a wimp. As a guy who generally doesn’t lightly pass on a challenge, I had to follow up.

I had admitted that although I try to commute to work by bicycle at least four days a week during the Spring, Summer, and Autumn, I take the car during the winter. Unless it’s ten below or colder, I run outside all Winter, so it’s not the “eager and nipping” winds that keep me off my bike, it’s the slippery surfaces. Jerry commutes by bike year round. He told me that the secret to success is in the tires.

Here is a photo of Jerry arriving at work this morning, as well as a close-up photo of the tires, the Nokia Snow and Ice 160s…or something like that… They are made in Finland, where they’ve got even more snow and ice than Minnesota. 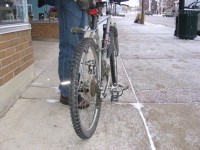 I appreciate the fact that Jerry is so determined to keep riding his bicycle, even during the winter months. It’s really great that he’s leaving one more downtown parking space available for a shopper or a diner. However, even if I had the special tires on my bicycle, I’ll admit I’d still be a little hesitant about riding on ice and snow.

Hey, Spring is just around the corner…

5 thoughts on “The Secret to Winter Bike Riding”