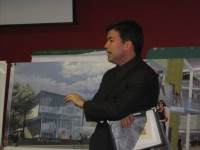 Carleton College Director of the Arts Steve Richardson presented to a large and lively audience this morning. The folks that gathered in the Archer House’s Riverview Conference Room were quite interested in the topic and he did not disappoint them.

Steve said that while working as Producing Director at Theatre de la Jeune Lune, he learned about collaborating, both between members of a creative team and organizations pursuing common goals. He believes that the defining force shaping the Carleton Arts Union project is collaboration.

He was frank that Carleton’s current arts facilities are old and inadequate…and some are actually subterranean. As one example of the potential offered by the new facilities, he pointed out that the visual art gallery will increase three times in size, allowing the College greater opportunities to display its permanent collection, feature current work by the Carleton community, and offer special shows through traveling exhibitions.

In describing the two phases of the project, Steve said that he views it as an opportunity. The physical space must support the creative collaborations within, if the design is not quite perfect, it can be modified in the second phase. He also emphasized that he sees the facility as first being a work space and second as a place to share the products of the work with the community. He said Carleton is moving toward greater clarity on how the engagement process can most efficiently and effectively occur.

The project is scheduled to break ground in 2009 and the first phase should be completed in 2011. Currently the development is intended to achieve LEED Silver standards but a level of Gold is being contemplated. Steve pointed out that the Old Middle School complex was a mix of architecture from 1910, 1934 and 1954 and that there will now be a new piece from 2011. Carleton is also working with Walker Parking Consultants to meet the parking needs of the project.

Forum participant Gail Jones Hansen, Vice President of the Northfield Historical Society and member of Northfield’s Arts and Culture Commission, said that she thinks it’s a wonderful project. She said that the Commission believes that the key to success in the arts and culture is collaboration and that Carleton College and the community are moving in the same direction, can share experiences, and gain from the process.