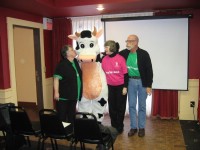 It’s a lot more than just some pretty flowers. The members of the Northfield Garden Club made that very clear this morning at the NDDC’s Monthly Forum.

In fact, the America in Bloom (AIB) competition is based on an eight-part plan that includes Floral Displays, Tidiness, Landscaped Areas, Urban Forestry, Heritage, Community, Turf & Groundcovers, and Environmental Effort. Pictured here with the soon-to-be-named NDDC Cow are Pat Allen, Judy Code and Jerry Nord. Let there be no doubt, this group will do whatever is necessary to succeed.

The first step is celebrating your community’s assets. Again and again, the presenters made clear that their initial efforts are focused on creating a positive culture within our community. Personally, I think some of Northfield’s leaders could benefit from listening to these Garden Club Ladies.

The many participants in this national program over the years believe that the effort has produced economic development, reduced vandalism, and resulted in a better overall quality of life. In the short term, they promise visible results and over the longer term the national attention generated often wins new resources for the communities that participate.

The group is starting with the section of the Riverfront between 2nd and 4th Streets and expanding outward from there to the furthest edges of the community. In addition to plantings, they have already listed cleaning up the river’s edge, responding to the graffiti, expediting curb repair, getting the next few benches installed, and painting the railings as priority projects. As an exciting visual addition to Northfield, the group is planning to install flower boxes on the pedestrian bridge, uniting the east and west sides of the river.

The Garden Club’s efforts in the America in Bloom competition are all about collaboration. They have met with Downtown Retailers, The Key, The Railroad, The City, the Cannon River Watershed Partnership, the Senior Center and both Colleges. All of these organizations are finding connections between their missions and some part of the AIB efforts.

There is still plenty of time to join the effort before the judges arrive at the end of July. Contact the group at northfieldinbloom@yahoo.com