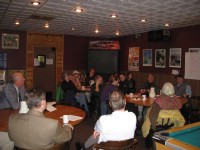 Almost two dozen downtown stakeholders attended a quickly assembled Special Block Head Gathering this morning at the Rueb-N-Stein. The topics could be categorized as relating to quality of life and included cleanliness, respect, safety, and friendliness.

The meeting was called by City Councilor Jim Pokorney and NDDC VP Joe Grundhoefer in response to recent experiences of graffiti and vandalism in downtown. Captain Mark Taylor of the Northfield Police Department was on hand as a resource and advisor. The examples brought up included rowdiness, noise, security, and mischief. Potential causes touched on inadequate lighting, insufficient patrols, poor visibility, and cheap beer. Current solutions shared mentioned calling the police dispatcher, calling the college deans, working with The Key, and the Police Department’s planned increase in foot and bike patrols.

We then moved on to possible additional steps to be taken. Joe Grundhoefer and Norman Butler are going to talk with other pub owners about tried and true ideas that they’ve developed over the years. Mark Taylor will be implementing the stepped-up patrols as early as this weekend. Jim Pokorney and Mark Taylor are going to work together on additional lighting and, potentially, surveillance cameras. Jim Pokorney is also going to check on extending the hours that key lights are kept on in priority areas. Josh Hinnenkamp and Judy Code are going to work together on intergenerational investments in infrastructure, believing that good activity drives out bad activity. Roger Kelm, Jim Pokorney and Mark Taylor are going to explore the “Citizens On Patrol” concept; Dean Kjerland, Norman Butler and Victor Summa offered to help. Mary Rossing urged everyone to share their stories about the costs of vandalism and advocated that all of us should work to form constructive relationships with the many different type of people that visit downtown. Finally, Jim Pokorney and I will develop and introduce a Code of Conduct for downtown…and the rest of the community.

It was great to have that many people show up on such short notice to discuss these issues. It will be even better to begin implementing some of the ideas raised.