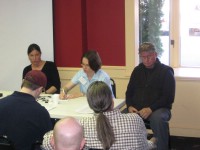 A panel of experts were extremely enlightening to the roomful of attendees at this morning’s Downtown Forum on the health of the Cannon River. The range and depth of their knowledge and experience impressed everyone.

Beth Kallestad of the Cannon River Watershed Partnership introduced the topic. The Cannon River Watershed covers over 900,000 square miles and passes through six counties on its way to the Mississippi River. The CRWP focuses on water quality improvement in many key points in this rather large area, including twenty-five different streams. Their projects include the very accessible stormwater management and sewage control as well as the more esoteric monitoring of TMDL, or Total Maximum Daily Load, of unhealthy substances. In the more urbanized areas of the Watershed, they have launched a new initiative supporting Low Impact Development.

Hugh Valiant, the DNR’s Fisheries’ Area Supervisor, talked about the efforts to overcome the river’s 100-year legacy, from 1850 to 1950, of being used as a sewer. He said that the last fifty years have seem many positive efforts to improve water quality with measurable results. He pointed out that as water quality increases, so does recreational value. He added that although the water quality has improved since the 1950s, not all the news is good. The surface run-off, the result of development, has rapidly increased. He said you could see the impact in the bank slumping and tributary erosion. The DNR is trying to preserve and restore wetlands, which help to moderate the flow of run-off. He introduced the subject of potential dam removal by calling it “literally, a once-in-a-lifetime opportunity”.

Cailin Orr, a visiting lecturer at St. Olaf College, Postdoctoral Associate at the National Center for Earth-Surface Dynamics, and Carleton College Alum, is a dam removal expert. She has studied twenty-five dam removals in western and southern Wisconsin, where the laws are different but the rivers are similar. Cailin then identified common concerns about dam removal, including sediment dispersion, water quality during removal, and the exposure of reservoir bottom. She said that the sediment is slowly and evenly distributed down river, that there are generally only a couple of days of water quality concerns, and that techniques for enhancing the reservoir bottom are being fine-tuned. She concluded by saying that we now have the capability of modeling the river after dam removal, and therefore predicting the behavior of the new channel.

A number of the participants would have stayed all morning. The panelists agreed that it could be useful to have a follow-up session, this time with more of the City’s leaders joining in the discussion. It is an opportunity that should be considered, explored and evaluated.