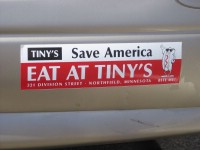 You may have noticed the bumper-stickers. They seem to be sprouting up everywhere, on all makes, models, and vintages of cars.

They read “Save America, Eat at Tiny’s”. I’m all for saving America, from what, for what…we can find out later, but let’s get to it. So I headed to Tiny’s with their Dogs All Day, to find out how I could help “Save America”.

According to the owner, Tim Sellers, it’s a result of the CLAP. That’s something like the Carleton Literary Association Publication.

Apparently a student with literary tendencies had a spiritual experience while eating a hot dog at Tiny’s. He viewed the simple offering of “the quintessential American culinary invention” as a powerful act against “all that’s homogenized and processed in fast food culture”.

The author of the article, a G. Cornwell, noted that Tiny’s dogs are not processed. They’re all Vienna Beef. Furthermore, they’re steamed, not roller-grilled, to maintain their shape, as is the bun. The writer recommends the Tiny’s Classic, with onions and secret sauce, but notes the Chicago, first experienced by Sellers himself in 1968 “on a street corner in the Windy City”, is also worth the trip.

Finally, Tiny’s non-traditional Happy Hour is mentioned. From 5 to 7 pm on Wednesdays, dogs are half-priced. That’s a deal on a dog not a dog of a deal.

So, if you want to help save America, eat at Tiny’s. Personally, I would suggest the Reuben dog, but then I’m a big fan of sauerkraut.