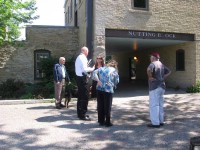 The NDDC will feature Northfield’s new Police Chief Mark Taylor at its July Downtown Forum. The forum is scheduled for Tuesday, July 1 at 8 a.m. in the Riverview Conference Room, located in the lower level of the Archer House, 212 Division Street, in downtown Northfield. The public is always invited to attend and participate.

Taylor was Patrol Captain of the Northfield Police Department for six months before being made Chief in late April of 2008, following the departure of former Police Chief Gary Smith. Taylor served for twenty years with the McLeod County Sheriff’s Department before coming to our community.

Taylor’s first visit to Northfield was on a motorcycle trip with his wife from Hutchinson to Red Wing many years ago. Taylor, pictured here discussing the logistics of the JuneBug Music Festival with Julie Bixby of The Contented Cow, considers himself a strong supporter of activities and events in downtown Northfield and has spent much time meeting with community members. “I believe private-public partnerships are the key to community safety,” he says, “as well as to the cleanliness and vitality of the area.”

The NDDC forum is intended as an opportunity for the Chief and the community to get to know each other better. However, Taylor is willing to address all topics of interest to downtown stakeholders.

The NDDC is a non-partisan, non-profit community organization dedicated to the vitality of downtown Northfield. The event is free and open to the public. As always, coffee and cookies will be served.