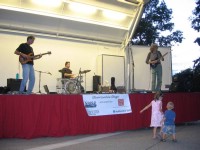 As the sun set on the Saturday night of ArtSwirl, the youth of Northfield, with unobscured vision and undiminished energy, picked up the torch from their fading seniors. Hopefully they have listened to the experiences of their elders and are using these concepts, or not, to shape their own strategies for the present and future situations.

At the official closing event of ArtSwirl, Politics and a Pint, there was an effort to take the ideas raised at the NDDC’s Forum further toward refinement and closer to action steps. As the guest presenter, I opened the discussion with what I saw as waves of theories on arts and economic development. At first the studies focused on proving that investment in the arts results in job creation and tax base growth. The next phase argued that the arts attracted much-in-demand high-value workers and economic investors. The most recent wave of articles advocates that the arts foster a culture of innovation – including creativity, problem-solving, and collaborative work patterns – that is essential for the economy of the future.

The dozen or so people who gathered for the discussion cycled back to at least a couple of the points raised at the Forum, the balance between priorities of creating an arts destination or an arts incubator and the appropriate role of the public sector in supporting the arts. Hopefully Bruce Morlan took some notes and will post them on Politics and a Pint.

Then yesterday, the NDDC’s Arts (, Recreation,) and Culture Committee met and worked to develop the many ideas raised in the past week into planks of an Arts and Culture Platform. Topics included Coordination and Communication, Differentiation and Branding, Adding an Arts and Culture Look to Key Websites, Evaluating and Enhancing Northfield’s Competitive Position within the Region, and Potential Public Funding Mechanism for the Arts.

There was a particularly unexpected bright spot at Politics and a Pint. A young, recently married couple visiting Northfield joined the discussion. Currently residing in Uptown Minneapolis, they had visited Stillwater, Red Wing and Northfield, looking for a new community in which to live. Arts and culture were important to them. Northfield won hands down.