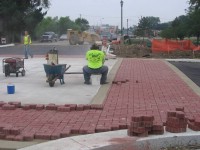 An editorial in today’s (August 4th) Star Tribune, A private sector fix for a downtown in need, supports the creation of a Downtown Improvement District for Minneapolis.

A Downtown Improvement District, or Business Improvement District, as they’re known in most of the country, or Special Services District, as they’re technically called in Minnesota, or Downtown Management District, as we’ve called it at the NDDC, gives building owners in a defined district the ability to assess themselves and then decided how the money is spent within that district. These Districts have been around for decades and are quite successful in giving property owners more control over their neighborhoods and moving the decision making on capital spending from the center to the periphery, where the leather meets the concrete.

The NDDC has spent considerable time researching BIDS and discussing them with downtown building owners. Last year, we were ready to move forward on the concept but another year of double-digit property tax increases led many building owners to request that we shelve the idea, at least temporarily.

Now that we appear to be making real progress on the property tax issue, it may be time to try again. In our previous work, Duluth and Rochester were valuable sources of information. Now perhaps Minneapolis will be able to offer us a few tips.