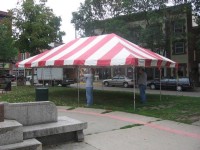 …the Defeat of Jesse James Days are almost here.

Northfield Historical Society Executive Director Hayes Scriven and his crew set up the information tent in Bridge Square this morning in anticipation of this week’s big cultural festival.

Sunday, September 7th, it’s the Jesse James 5 and 15 Ks at 8:00 a.m. registration in Bridge Square, the Royalty Reception, 10:00 a.m. at the Northfield High School, and the Grand Parade, 2 p.m. along Division Street.

So, pull on your boots, hitch up your belt, tip your hat low over your eyes, and mosey on down to the Defeat of Jesse James Days, centered in the heart of Northfield, our historic downtown.