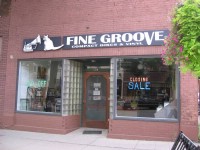 Owner Brian Kenknight admits that sales have steadily declined in recent years due to the market’s changing access to music. However, his decision was at least partly shaped by personal reasons.

A number of “legendary” record stores have closed in recent years, including Oarfolkjokeopus in Minneapolis, and many pundits suggest that the trend is affecting our culture. In addition to being the places where the latest music releases could be heard and their album art debated, record stores were gathering places for professional musicians and amateur critics. Stories were shared, events were promoted, and sometimes even gigs were found.

The survivors, such as the Electric Fetus, with stores in Minneapolis, Duluth and St. Cloud, have worked to offset declining CD sales with novelty items such as t-shirts, posters and gag gifts. The floor space devoted to music sales is now about half of the total.

Personally, I will really miss the atmosphere of Fine Groove as well as Brian’s encyclopedic knowledge of music. However, Northfield will still have access to used CDs at Echo Used DVDs and Games and new ones at River City Books.

Maybe musicians spending more time hanging out in coffeehouses will lead to a new revival in folk music.