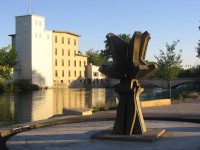 Ray “Jake” Jacobson’s “Harvest” sculpture has been placed in its permanent home.

The piece was temporarily sited outside of the entrance to Malt-O-Meal, one of Northfield’s major employers and one of the sculpture’s major funders, but is now firmly installed along the soon-to-be-finished Riverwalk enhancement between 4th and 5th Streets.

The sculpture’s location was selected to visually link the artistic commemoration of Northfield’s economic roots in milling to its on-going business benefits from the historic Ames Mill.

The grist mill was started by town founder John North, later sold and repositioned as a flouring mill by North’s friend Charles Wheaton, and eventually sold to the mill’s namesake, Jesse Ames.

The Campbell Cereal Company purchased the mill in 1925 and founded the Malt-O-Meal company in 1927, which continues to produce a variety of cereal products from a number of sites, including the Ames Mill.

The official dedication of the sculpture was originally scheduled for Thursday, October 2nd. Philip Spensley, Chair of Northfield’s Art and Culture Commission informs me that it’s now been pushed to the 16th. More details to come.

1 thought on “Harvest Sculpture in Place”