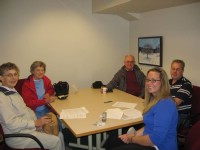 The NDDC took another step forward on the next “Historic Northfield” sign last week. The property owners of the site signed the lease for our second location along Highway 35.

Clockwise around the table are Marlys Bauer, Nancy Downhour (known as “the sisters”), David Downhour, NDDC Vice President Joe Grundhoefer, and First National Bank notary Angela Busch. It was raining pretty hard that morning, so Marlys was able to leave the family farm and come into town for the signing.

The sign is another partnership between the NDDC and the Convention and Visitors Bureau and the implementation team once again includes Brushworks and Duane Fredrickson.

The second sign will be much like the first one, except it’ll be blue instead of red. Apparently, the red would fade too quickly in the southern sun.