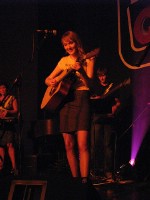 Saturday’s Strib had an article that caught my attention. It was called “Listen Local, Buy Local“.

The story was about the Minneapolis-based music store The Electric Fetus. The store has launched a new initiative intended to get folks to shop locally while supporting Minnesotan visual and audio artists called “MinnEconomy“.

Every month the Fetus’ locations in Minneapolis, Duluth and St. Cloud will feature visual art by Minnesotans on the walls and music performances by Minnesotans in the stores with locally-created items sold at a ten percent discount. The campaign is not only about stressing the economic benefits of shopping locally, it is also intended to raise awareness of local creative talent which, according to Fetus Manager Bob Fuchs, “makes our community unique and interesting”.

The story quotes Stacy Mitchell (with whom I once lunched at Chapati), head of the Institute for Local Self-Reliance repeating the economic importance of supporting local businesses but also noting that communities that have a shop local effort are better weathering the current downturn. Dan Marshall, a founding member of the Twin Cities Metro Independent Business Alliance, emphasized that there is leverage to be gained by the networking of independents to raise their visibility. Fuchs summarizes the goal succinctly, “consider the cool, unique stores around town before you go to the strip malls”.

Of course, I’d like to bring the Fetus’ good idea home to Northfield. Perhaps on an upcoming Third Thursday, local pubs could feature local artists and local stores could discount local products. It’s all about working together to raise awareness and visibility and, at least in this case, having a little local fun.