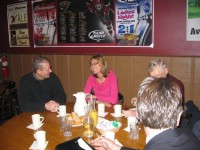 The NDDC hosted its first Block Head Gathering of 2009 yesterday. The topic was Economic Expansion. More specifically, the discussion focused on obstacles to and tools for In-fill Development and Property Redevelopment.

Several of the attendees described challenges that they had faced while pursuing economic expansion. While acknowledging that there may have been imperfect processes in the past, Rossing, Thomas, and Walinski expressed hope and/or confidence that many changes had been implemented or were underway which should greatly improve, through speed, clarity and consistency, the process.

Mayor Rossing encouraged business and building owners who had encountered such frustrations with the economic development process to share them with her. Mary can be found most days at Present Perfect, 419 South Division Street.

The gathering concluded with a brief discussion of tools for economic expansion. The remarks focused on addressing issues raised in the discussion of obstacles. Walinski announced that Gunderson would work as an advocate for projects within the City’s process and Rossing suggested that the City should consider providing grants or no-interest loans to address additional costs generated by the building official’s interpretation of the construction codes.

All of the participants seemed to agree that improving our processes is an on-going effort. Discussing the problems is a start, devising and implementing proposed solutions is the next step, and evaluating the results completes the cycle.