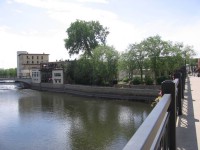 The Northfield Downtown Development Corporation (NDDC) will present a forum on the recently adopted 2008 Comprehensive Plan and currently under revision Land Use Regulations. Alice Thomas and Tracy Davis, members of the Northfield Planning Commission, will be our guest speakers.

The forum will be held on Tuesday, June 2nd, 8:00 a.m., in the Riverview Conference Room of the historic Archer House, 212 Division Street in downtown Northfield.

A Comprehensive Plan provides the overarching vision, general principles, goals and strategies in eight areas, one of which is Land Use. The 2001 Comprehensive Plan was generally relevant and similar in many ways to the newly adopted 2008 plan.

The meeting will include information most relevant to the Downtown about aspects of the 2008 Comprehensive Plan and possible implications for the resulting regulations. The new plan includes revisions in the zoning map and a goal of using “form-based” planning in the new regulations. Form-based planning places more emphasis on the physical form rather than the traditional basis of “uses”; and emphasizes public spaces, social interaction, pedestrian-scaled blocks, connectivity, and compact development.

Some of the goals in the design of the new regulations are to reduce the number of conditional use permit reviews, provide clear regulations for developers, and a more timely review process. The revision of the regulations is nearing completion.

The NDDC believes that these revised regulations could have great influence on in-fill development and site redevelopment in downtown Northfield and urges interested stakeholders to participate in Tuesday’s forum.

The forum is free and open to the public. Coffee and cookies will be served.