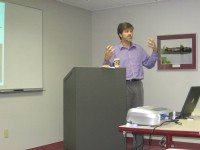 Their purpose was to share ideas for strengthening our downtowns and working together to return the Main Street Program to Minnesota. Eighteen people from eight different communities reviewed the Four Point Approach, offered lessons learned from their own experiences, and brain-stormed additional tactics for familiar challenges.

When the program was ended in Minnesota, six communities, Montgomery, Belle Plain, Pine Island, International Falls, Renville, and Wilmar, worked together to keep the network alive. Their efforts resulted in the formation of Hometown Minnesota, which produced yesterday’s event.

As I noted in a previous post, the Preservation Alliance of Minnesota is working to restore the Main Street Program to Minnesota. As part of yesterday’s gathering, the attendees were encouraged to discuss the program with their legislators.

Even if the program isn’t restored in this legislative session, the gathering was a boost to the attendees’ on-going efforts in their communities. We believe that “successful downtowns make successful communities”.

When the NDDC was created in 1999, it was based on the Main Street Approach. As one of the founders, Brett Reese, always says, “great downtowns don’t just happen”.