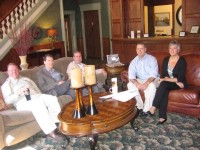 Members of the NDDC’s Board of Directors visited The Archer House recently. They met with General Manger Todd Byhre and discussed recent accomplishments and future plans.

The Archer House River Inn opened in 1877. The impressive four-story red brick structure has long served as a visual icon for downtown Northfield.

Todd was hired as the manager about a year ago. He brings extensive experience in the hospitality industry to the job and is already producing positive results – occupancy has almost doubled.

There have been some more visual impacts during Todd’s tenure, the NDDC Board Members all remarked on the beautifully refurbished lobby. More projects are planned; look for some significant sprucing up in many of the hotel’s public areas.

Todd suggested that some dramatic improvements to the outside of the building are also being considered. He said that the goal is to make the structure “read” more clearly as a hotel from the street.

The Archer House is committed to strengthening downtown’s economy. They plan to distribute coupons from local businesses on their website.

The Board Members had a number of questions for Todd about marketing Northfield. He said that he thinks that the town has a lot to offer for women and couples but not as much for men and children.