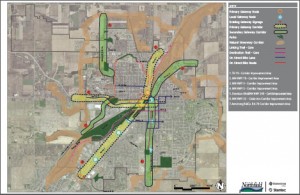 One of the two dozen or so projects that the Task Force has recommended to the City Council is the so-called “Gateways(s)” Project.  Although the actual project areas encompass substantial corridors related to these so-called gateways, the focus, at least initially, was on potential improvements at key locations along the city’s main roadway entrances.

The objective was to create a “sense of arrival” for people coming to our town and as they moved through and/or into our community.  However, as important as visually enhancing these entrance or gateway areas is identifying priority needs and opportunities for multi-modal circulation and safety, as well as strengthening the connections between different neighborhoods or sides of our community.

The work, and the discussion, has just begun.  Citizen input, early and often, is a priority for the process.  Each month of the three-month process (November, December and January) will include a public input session.  The first of these sessions in Monday, November 21st, 5 to 7 p.m., location to be determined.