In March 2019, the NDDC was awarded a grant of $4,200 from Minnesota Main Street, a program under the auspices of The Preservation Alliance of Minnesota.  The purpose of the grant is to provide funding for lamp post banners and Riverwalk benches in the downtown Northfield district.

An open competition was held for local artists to submit design concepts for the banners.  We received several promising applications, with Steve Maus’ ultimately being selected by a special Public Art Review Committee through the City of Northfield’s Arts and Culture Commission (see below for more info).  We think they look pretty great, if you ask us! 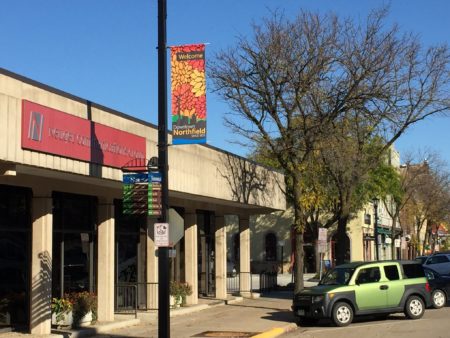 These new banners replaced the red, white and blue “Historic Northfield since 1855” banners that have graced downtown Northfield for almost 20 years. The Historic Northfield banners were funded and produced in 2005 by the Sesquicentennial Committee and gifted to the City of Northfield. 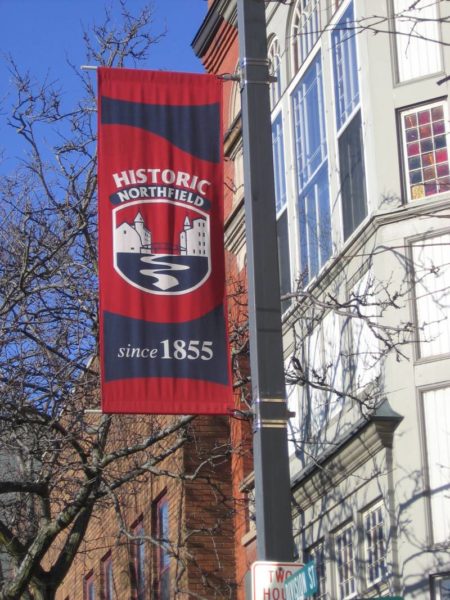 The Northfield Downtown Development Corporation and the City of Northfield Arts and Culture Commission unveiled the winning design from their street banner competition last week. The new banners will be hung on lamp posts along Division Street and Water Street in downtown Northfield beginning this fall.

The winning artist is Steve Maus, a local artist and a staff member at the Northfield Public Library. “I’ve always wondered who the people were winning these contests. It was exciting to win,” said Maus.

The Public Art Review Committee (PARC) reviewed and selected the winning design. “Steve’s design is bright, bold, and eye-catching. It captures elements that speak to our history as well as our future as a community. We appreciate Steve’s willingness to work with PARC through drafts of the banner to arrive at the final design. We are so pleased and excited to have these banners up!” said Alyssa Melby, chair of the Arts and Culture Commission and a PARC member.

“It’s fun thinking about the many thousands of people visiting Northfield every year who will see these banners,” said Maus. Besides having his design displayed for thousands of visitors and residents annually, he also received $400.

The new banner features the words “Welcome” and “Downtown Northfield since 1855,” a silhouette of a windmill and buildings, and incorporates part of the city logo with the swooping blue and green indicating the river and farmland on a brightly colored backdrop of orange and yellow flowers. The winning design replaces the red, white and blue “Historic Northfield Since 1855” banners, which have been used since 2005.

The Northfield Downtown Development Corporation was awarded a mini-grant of $4,200 by Minnesota Main Street to assist with funding the competition, production and installation of the street banners.