The NDDC welcomes the Weitz Center for Creativity to Downtown Northfield.

Technically only a half block away from the C-1 Zone (part of the definition of the downtown as per the City Zoning Code), what was once “the old middle school” is only a block away from the Carnegie Library and only two blocks away from the “heart” of Northfield…Bridge Square.  The NDDC is going to reach out across that short distance and say “Welcome, we’re glad you’re here.”.

The NDDC believes that the Weitz will be a great addition to Downtown Northfield.   In fact, the NDDC is so excited about the opening, we thought somebody should throw a party.  Fortunately, somebody is…

Carleton College cordially invites everyone to a special community open house celebrating the completion of the new Weitz Center for Creativity on Saturday, September 17, from 3 to 6 p.m. The celebration will feature tours of the building and its many unique spaces, as well as light refreshments and musical entertainment. END_OF_DOCUMENT_TOKEN_TO_BE_REPLACED 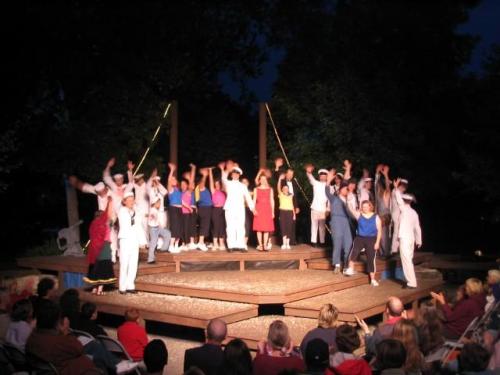 Recently some people have suggested that we should direct a substantial portion of the resources available to the arts community and use them for a marketing campaign that promotes Northfield as an Art Town. I think that if we’re going to spend money on a sales pitch, we should direct it at John Villani and invite him to be our guest in Northfield.
END_OF_DOCUMENT_TOKEN_TO_BE_REPLACED

On Thursday, May 19th, the Northfield School District is holding an Open House for the public to view and provide feedback on Carleton College’s proposal for reuse of the Historic Middle School and site.

The Open House will be held at the New Middle School Media Center, 2200 Division Street South, from 5 pm to 7 pm.

The School Board expects to make a decision on June 13 about how to reuse the facility and wants to receive public input.
END_OF_DOCUMENT_TOKEN_TO_BE_REPLACED

Sunday’s Star Tribune has a front page business section story about Artspace Projects, the Minneapolis-based developer that recently withdrew its proposal for the Historic Middle School complex in Northfield. People have started asking me, “if Artspace can do it on both coasts and many points in between, why couldn’t they do it in Northfield?”

The article in the Strib features a number of photographs of Artspace’s Washington Studios project in Duluth. I was the project manager at Artspace for that development and I thought that I might compare the financing for that project with the potential structuring for the Historic Middle School in Northfield as a basis for examining the feasibility of the potential project.
END_OF_DOCUMENT_TOKEN_TO_BE_REPLACED

For better or worse, I’m not a Carl or an Ole. I got my undergraduate degree (in Government, with a comparative politics focus) from Wesleyan in Middletown, Connecticut. An article in the 2005 Issue 1 of the Wesleyan magazine was of particular interest to me: SCHOOL OF DREAMS: The newly opened Green Street Arts Center brings hope to a troubled neighborhood in the North End of Middletown.

Wesleyan built a community arts center for Middletown called the Green Street Arts Center. Working with the local non-profit NEAT (the North End Action Team), Wesleyan’s Center for the Arts determined that the best way to achieve outreach to the community was to build the community an arts center.

The leadership on this initiative came from Wesleyan’s Vice President, Peter Patton. According to the article, Vice President Patton understood that “NEAT wanted a community center: a gathering place, a source of pride, and a central hub”.

Wesleyan determined that “the center had to be built with the same eye to quality and pride that Wesleyan would lavish on a central-campus building. A little storefront wouldn’t be a beacon for the commmunity”.

The college and community team found a perfect location for the project: “a hulking old brick building” that had once been the parochial school for St. Sebastian’s church. “With its generous rooms and tall windows, it was easy to imagine sunlight streaming in on classrooms filled once again with laughing children”.

“With much hard work, the funding began to fall into place through city, state and federal money, as well as a $500,000 gift from an anonymous alumnus” who directed the gift to the project at the urging of Wesleyan President Douglas Bennet.

Now that the building is open, Wesleyan continues its support of the Green Street Arts Center through programming. 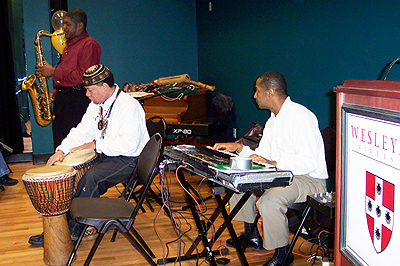 The Kamau Jazz Trio performs at the Grand Opening of the Green Street Arts Center.