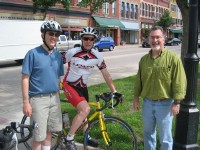 I was walking across Bridge Square on my way to the post office the other afternoon when I heard someone calling out my name.

It was Bruce Anderson (the photographer for this picture), along with Bill Ostrem, and some guy in a bike suit signed by Lance Armstrong (no kidding).

The mystery guy was Steve Rusk. He is the chair of Edina’s Non-Motorized Transportation Task Force (or whatever they call it up there). Steve was in town to meet with the Northfield group to discuss lessons they’ve learned in that community to our northwest. Edina also has an authentic downtown surrounded by historic residential neighborhoods, so I’m sure they’ve had some experiences worth considering.

Bill told me that he’s going to blog about it as soon as he and Neil Lutsky get back from the gathering of state bicycle leaders.

The three groups that made a commitment to work together for greater bike and pedestrian safety in Northfield have enlisted the assistance of Carleton College to bring a satellite broadcast of a teleconference to Northfield. The discussion will focus on new ideas and resources for increasing bike and pedestrian safety in communities. The teleconference will be held in the second floor conference room of the Language and Dining Center (gosh, I love that combination, perhaps they could add stringed instruments too) on the Carleton Campus from 1 to 4 pm today. For more information, see below:
END_OF_DOCUMENT_TOKEN_TO_BE_REPLACED

On Saturday, May 6th, at 10 am, as part of Sping Fling, the NDDC is sponsoring an event to promote bicycle friendliness. Bring your bike downtown, be entered in a drawing for prizes and enjoy bicycling around our wonderful downtown community. It all takes place in the “Old Jacobsen Parking Lot” near Mike’s Bikes, Present Perfect and Hogan Brothers.

So gather up the whole household and… 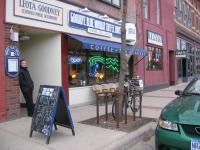 At this month’s Forum, there was much discussion about making Northfield more bike-friendly. With me present, of course there was some discussion of downtown’s need for more bike racks.

On the recent edition of Locally Grown, I announced that I had conducted a survey of the locations of bike racks downtown. Several people have asked me for that list.

Although the NDDC has initiated the creation of a map and directory of these locations, I thought that I could at least post my list for now. If I’ve missed any, please let me know. Working together, we’ll accomplish much more.
END_OF_DOCUMENT_TOKEN_TO_BE_REPLACED

There was a good deal of energy and determination in the room at the NDDC’s Monthly Forum. The topic was broadly downtown amenities but most of the specifics focused on increasing transportation safety throughout the community, particularly making Northfiled more bike and pedestrian friendly.

Howard Merriam opened the discussion with a quick summary of the streetscape plan, parks and trail system and the community greenway concept. (He also put in a plug for the City of Northfield’s ArtsPlan.) Howard suggested that unifying and motivating themes could be celebrating the pedestrian scale of downtown and recognizing the bicycling potential of the community. Eric Johnson reminded us that there were many examples of best practices available, including Boulder, Colorado. Pointing out that 50% of bike fatalities result from riding in the wrong direction (especially at intersections) he argued that education must be part of the effort. Bruce Anderson echoed Howard on the human scale of our commmunity being a great opportunity to expand the use of bike and foot as primary modes of transportation. He also put it in the context of positioning Northfield to thrive in an economically challenged and energy constrained future.

When asked what specific action steps to take toward uniting the regional trails with the downtown streetscape, putting the best practices into appropriate designs, and providing details to guide the transition to the next economy, the panelists cited a number of resources with ready lists of ideas. The resources included the New York City Need List, the Bike League’s Action Plan and the County’s Transportation Plan for Woodley Street; while the specifics included fixing bad streets, longer light signals for crossing, transportation safety education for the entire community, enforcing existing laws, reviewing out-of-date codes and, I’m pretty sure, installing bike racks downtown.

Many of the participants felt that a partnership between the City, the NDDC, RENew Northfield and the Mill Towns’ Trail Group, among others, to identify common goals, share the work load and raise the visibility (and priority) of this issue, would be very productive at this critical moment in time. Read Bruce’s blog for more information on the forming of this coalition and potential models for moving forward.